In a press conference today Governor of The Bank of England sought to reassure investors and economists as to the security of the UK banking system.

In his initial statement he had this to say:

He also outlined plans to increase the availability of credit to individuals so that those affected negatively by the uncertainty brought about by Brexit had easy recourse to lending.

He had this to say; “90% of the stock of UK lending will have greater flexibility to provide credit to UK households and UK firms.”

Governor Carney re-iterated the statements he made before the referendum, saying;  “The UK has entered a period of uncertainty and economic adjustment”

He then went on to reassure the public by stating; “The Bank [of England] can be expected to take whatever action necessary to ensure monetary stability.”

In the open question and answer sessions he was asked about the markets. The FTSE 100 is higher than it was, the pound has stabilised, it doesn’t look as scary as a lot of people thought it might be?

Governor Carney pointed out that the larger UK companies were mainly international, and said that we should look at the domestic equity markets, such as the FTSE 250 - “There’s been a much more significant move in those markets” 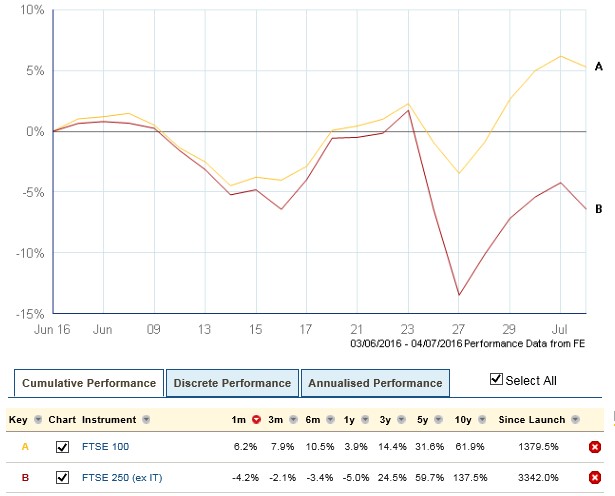 That said, the pound has been absolutely hammered against the dollar, The British pound slid on Tuesday, touching the lowest in 31 years against the USD, at $1.31. Historically, the British Pound reached an all-time high of 2.86 in December of 1957 and a record low of 1.05 in February of 1985.

Against the Euro, the Pound has also slipped significantly. It closed at €1.19 yesterday, the lowest level in nearly three years. Historically the pound reached an all-time high of €1.60 in July 2002, and a record low of €1.02 in December of 2008.

Since the renegotiations were announced the pound has slipped against the Euro by approximately 16%.

When asked about whether people should be taking on debt when we are in such an uncertain period, Governor Carney said that The Bank always urges people to be prudent, whatever the market conditions. The message would be the same whether we were in the 10th year of a boom, or the 10th year of a recession.

He went on to say that The Bank had put in place measures to ensure that lending would be available to those that need it.

Overall, the message is clear that The Bank is ready to support the UK and smooth out the choppy waters that they feel are ahead.